One of the most common skin diseases is acne . This form of severe pimple formation occurs particularly during puberty and usually disappears on its own from the age of 20.

Acne , pimples and blackheads are particularly common during puberty . However, some people still suffer from this skin disease later.

Every adolescent develops pimples , blackheads and blemished skin during puberty . Acne is the aggravated form of this natural formation. It is primarily the inflammation of the sebum follicle.

First of all, it produces non-inflammatory comedones that are only disturbing for aesthetic reasons. Over time, however, inflammatory efflorescences develop, such as pustules or nodules. Acne occurs particularly frequently in adolescence, occasionally even in newborns and rarely in adults.

Naturally caused acne occurs when the sebum follicle produces too much sebum. A comedo develops from this. Psychological factors such as stressful situations , but also physical stress, for example from smoking, can greatly promote the development of acne. As soon as the first comedones have formed, the bacterium Propionibacterium acnes comes into play. It favors the inflammation of the blackheads and in this way leads to the typical appearance of the disease.

Acne can also develop through external influences. These forms occur more frequently in adults and newborns, as naturally-caused acne sets in more quickly in adolescents and external influences only further promote it. Excessive UV radiation causes the lipids contained in sunscreen, for example, to react with free radicals in the skin and can lead to an acneiform complexion. Other cosmetics can also develop if they do not leave the skin enough room to breathe.

In other cases, chemical substances are responsible for the formation. Drugs containing lithium or corticosteroids, but also direct contact with chlorine or tar, can provoke a skin reaction.

The symptoms that arise depend on the type of acne a patient is suffering from. In acne comedonica, which is mainly observed in women, open and closed blackheads form, which become visible as small black dots. The blackheads are particularly common on the nose and on the chin and are often accompanied with greasy skin shine.

However, inflammation rarely occurs in this form of acne. For acne papulo-pustulosa, on the other hand, inflamed, pus-filled pimples and reddish papules are typical. Sometimes small lumps also form, which can become painful. The pimples and pustules mainly affect the forehead, chin and cheeks.

They also often spread to the neck, chest, and back. Inflamed, pus-filled pimples can leave scars after they heal. This risk is particularly high if the patient expresses the pus, which also usually worsens the inflammation or transfers it to other areas of the skin.

In rare cases, acne conglobata occurs, which affects men more often than women. With this form of the skin disease, patients suffer from extremely inflammatory lumps that can be up to two centimeters in size and often mutate into deep abscesses .

Pubetary acne usually develops in girls between the ages of 12 and 13; in boys, acne usually occurs one to two years later, but then also lasts longer.

As a rule, pubescent acne does not have to be treated by a doctor, but can be positively influenced by cleanliness and facial hygiene.

Sometimes, however, severe forms of acne also occur, whereby not only the face, but also the back, chest and buttocks can be severely affected by pimples and blackheads. It is beneficial to have this extreme form of acne treated by a dermatologist in order to prevent scars as much as possible.

Acne is most common in teenagers who are just past puberty. At this age, acne can be quite widespread. This disease does not necessarily have to be treated as it is not a harmful situation. However, if the patient feels uncomfortable with it, the acne can also be treated with medication.

In most cases, the acne will go away on its own. Here, however, the healing time can be relatively long. In other cases, acne can also worsen, leaving severe scars on the skin. If the acne is treated by a doctor, the treatment is usually carried out with medication or with a cream or ointment.

There are some side effects with medication, such as headaches or general dry skin. Those who use ointments and creams against acne will also often suffer from dry and cracked skin, as these remove the oil from the skin. In the case of very pronounced acne, the disease can also lead to psychological problems.

This includes a general malaise or depression caused by bad and blemished skin. These can be compounded by incidents at work or at school. In most cases, the acne has a positive disease course.

Acne disease during puberty is normal. However, this widespread skin condition can take various forms and go through several stages. Certain forms of acne can affect newborns and toddlers.

In the case of milder forms of acne, visits to the dermatologist are not absolutely necessary. However, these should be done if those affected suffer from acne disease. In some people, acne persists into adulthood. This is also a reason to see a dermatologist.

The dermatologist first determines how severely the skin is affected and what type of acne it is. Without this finding, the treatment cannot take effect. Acne can be work-related or triggered by medication. Acne inversa, chlorine acne or alcohol-related acne must be treated differently than normal puberty acne. In addition, acne may have hormonal causes that may also require treatment. This are gynecologist or andrologist responsible.

The physiological acne that occurs more frequently in adolescents at puberty can be treated with commercially available creams, lotions and cleansing fluids. However, if there are pronounced forms with purulent inflammation and boils, a doctor’s visit is advisable. This already makes sense against the background of possible scarring. Each form of acne requires different treatment strategies.

All cases of acne that go beyond the mild form must be treated by a dermatologist (dermatologist). The aim of drug treatment is to prevent the formation of new blackheads , to heal the inflammation and to positively influence the cornification process in the sebum follicle.

First, a cream is prescribed that is mixed with alpha-hydroxy acids. These have a comedolytic effect and dissolve the first blackheads. They also have an effect against their new formation. As a rule, the cream must be treated with the cream for at least three months.

At the same time, antibiotics can be given to fight the bacteria on the skin that are partly responsible for acne. They are either applied as a cream or taken in tablet form.

There are also many other treatments that work in a similar way.

In women, it can help to give additional hormones . Affected women usually produce too many androgens, which can promote acne. Therefore, she receives targeted therapy with female hormones to gradually resolve the acne.

In most cases the acne is mild, meaning that the symptoms are not particularly pronounced. In these cases, the acne disappears on its own after puberty and the stabilization of the hormonal balance, and scars do not remain.

If the acne persists into adulthood, the prognosis is less favorable. Visible, deep scars usually remain. Although the scars can be reduced, the skin will not look completely free of scars, which can sometimes cause psychological problems for those affected. Otherwise, the patient does not have to fear any physical impairment. Acne rarely persists beyond the age of forty – the prognosis is therefore always favorable.

In acne inversa (a particularly severe form of acne), the changes in the skin can promote the development of skin cancer. Sufferers should have their acne treated by a dermatologist at regular intervals . With regular check-ups and treatments, the prognosis for acne inversa is also favorable.

Acne can only be prevented to a limited extent. Since it arises from an interplay of internal physical relationships, over which the human being has hardly any influence, he can only avoid external causes as far as possible. So that should Smoking cigarettes generally be avoided, as well as a balanced diet can help maintain skin health. Cosmetics should always be removed thoroughly after wearing to allow the skin to breathe. Pimples must never be squeezed out, otherwise the acne will spread.

After acne has been treated, various circumstances may require follow-up care. Many sufferers retain scars that they find unaesthetic or that cause them serious problems. The discoloration of the scars (usually reddish in fair complexions) disappears by itself after a few months. However, heavier scars also form depressions or elevations.

Depending on the severity and level of suffering, there are various treatment options available to reduce or even remove such scars. The gentle therapy methods in particular can be used by those affected themselves with the help of home remedies or over-the-counter products. Dermatologists and professional beauticians have tools at their disposal with which clear results can be achieved more quickly.

However, these initially attack the skin tissue more strongly, making it susceptible to undesirable effects such as inflammation or discoloration. Therefore, methods such as grinding, laser therapy or TCA peeling should only be carried out by specialist staff and under medical supervision.

Since acne can basically occur at any age, it can also recur after successful therapy. Those affected should continue to follow the same principles of diet and personal hygiene that are useful in preventing and treating acne.

Acne does not necessarily have to be treated by a doctor. Most pimples can be reduced independently with the right skin care and some home remedies .

First of all, it is advisable to clean the affected parts of the body several times a day with a fresh washcloth. Before using creams, we recommend nourishing steam baths with additives made from rosemary , chamomile or sea salt. Also honey and curd help acne and provide the skin with moisture and minerals. To prevent the acne from spreading further, the pimples should not be touched or squeezed out if possible. Inflamed or cracked blackheads are best disinfected with alcohol-based facial toner. In addition, high-fat creams and peelings should be avoided in order to avoid further skin irritation.

If these measures do not show any effect, the pill may also help. The preparation can help improve the complexion, but as a remedy for acne it should only be used in consultation with a gynecologist .

Lastly, a healthy lifestyle also helps. A balanced diet , exercise and adequate sleep reduce acne and contribute to a clear complexion in the long term. 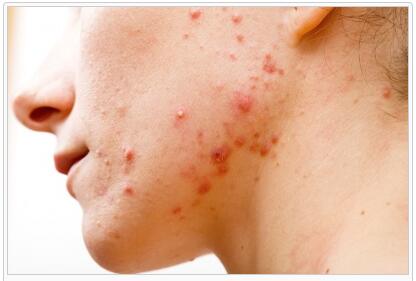